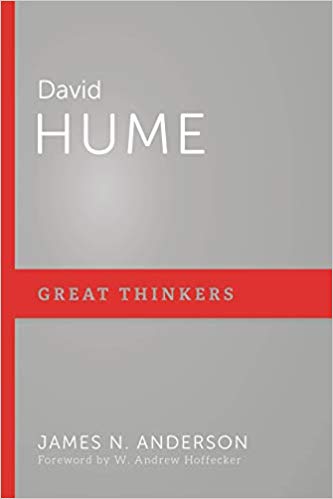 WTS Books is running a fantastic Christmas gift guide sale. Here is some information about one of their books:

Through his pursuit of a naturalistic grounding for morality and his forceful critique of supernaturalism, Scottish philosopher David Hume significantly undermined confidence in orthodox Christianity.

Professor, minister, and philosopher James Anderson summarizes the major points of Hume’s thought and offers a critical assessment from a distinctively Reformed perspective. He shows that Hume’s arguments, far from refuting the Christian worldview, indirectly support that worldview by exposing the self-defeating implications of naturalism. Deepen your understanding of this immensely influential thinker, and you will be better able to engage with today’s secular challenges to faith.

James N. Anderson (PhD, PhD, University of Edinburgh) is the Carl W. McMurray Professor of Theology and Philosophy at Reformed Theological Seminary in Charlotte. A member of the Society of Christian Philosophers, he is also an ordained minister and the author of Paradox in Christian Theology and What’s Your Worldview?

“An uncommonly successful introduction, explanation, and assessment of the work of one of the most influential authors of the last three hundred years. Anderson’s account of Hume’s project, method, and principal conclusions is clear, accessible, and philosophically perceptive. In a remarkably short space, Anderson gives a very strong overview of Hume that makes Hume’s importance easy to understand. His assessment of the success of Hume’s overall project and individual assertions is rich, biblically serious, consistently Reformed, and likely to edify readers regardless of their previous exposure to Hume’s works.”

“The skepticism of David Hume has frightened many who have sought to follow Christ. But James Anderson’s book shows that it is the followers of Hume who should be frightened. Anderson presents an account of Hume that is accurate and comprehensive, yet concise. It is easy to follow. And it shows clearly where Hume went wrong, and how his errors illumine the biblical alternative. Hume fell into skepticism because he failed to think God’s thoughts after him.”

“James Anderson’s book on David Hume is a masterly summary and critique of one of the most important and influential philosophers in modern Western history. With clarity and insight, Anderson presents the overall structure of Hume’s philosophical work, as well as devastating criticisms of Hume’s epistemological project. Once read and grasped, this book will provide the context and proper, Christian critique for anyone wanting to pursue further study in Hume, or in Western thought since Hume. I am glad to have Anderson’s book in my library.”