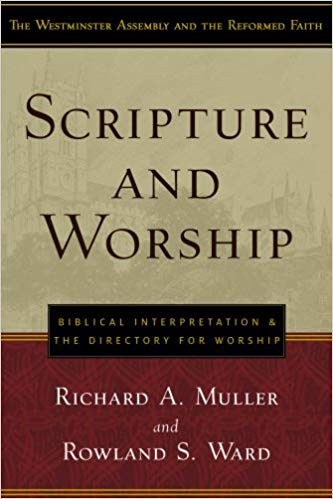 Ryan Speck’s Review of SCRIPTURE AND WORSHIP: BIBLICAL INTERPRETATION AND THE DIRECTORY OF WORSHIP, by Richard A. Muller and Rowland S. Ward

According to Carl R. Trueman (who was professor of Historical Theology and Church History at Westminster Seminary until 2018), in the last twenty years, scholars have offered a revisionist history of Reformed theology during the time of the Westminster Standards (16th and 17th centuries). These scholars have suggested that the Westminster Standards are not in conformity with earlier reformed theologians. To combat such misconstruing of history, Westminster Theological Seminary in Philadelphia established the Craig Center for the Study of the Westminster Standards in 2002 and appointed Trueman as chair of the Craig Committee. This Committee sponsored a conference in 2004, and its two plenary speakers (Muller and Ward) produced this book, arising out of their conference speeches. In fact, the Craig Committee is working with P&R to produce a series of books on the topic of The Westminster Assembly and the Reformed Faith. Other books in the series include: The Faith Once Delivered: Essays in Honor of Dr. Wayne R. Spear edited by Anthony T. Selvaggio and The Westminster Assembly: Reading Its Theology in Historical Context by Robert Letham.

Richard A. Muller received his Ph.D. from Duke University and is professor of historical theology at Calvin Theological Seminary.

Rowland S. Ward received his Ph.D. from Australian College of Theology, Sydney, and is pastor of Knox Presbyterian Church in Melbourne, Australia.

Section 1: Scripture and the Westminster Confession, pp. 1-82 (Richard A. Muller)

Are you tired of listening to a sermon or reading a book that raises more questions than it answers? Are you wearied by speakers who make suggestions and offer thoughts but hardly ever arrive at firm conclusions? You want answers. You want firm, decisive truth. You are frustrated by some of the leaders of the church who seem always to be learning but never coming to a knowledge of the truth.

One of the true blessings of reading a book written by a conservative Biblical scholar is that he clearly knows what he is writing about! Accordingly, you learn a number of surprising facts and gain an overall sense of the subject. However, scholars are not generally known for their warm, devotional, and accessible writing style. True to form, in the first section of this book, you find no analogies or illustrations (much less pictures!) to help you understand. In fact, at times (unless you are in the know), you sense that Muller is utterly demolishing his opponents’ arguments, even if you are not always sure how and whose (though Rogers and Torrance are certainly under fire). Nonetheless, you, at least, are convinced of Muller’s main thesis, which is that the Westminster Confession stands seamlessly in line with the theology and method of previous Reformers and of scholasticism.

If you are sincerely interested in this subject and are willing to press through some thickets, you will gain valuable information related to the Westminster Confession and its view of Scripture. For example, did you know that, before the Westminster Assembly, the English Parliament commissioned a study Bible? It is often referred to as The English Annotations. Given that the comments of the Annotations themselves (apart from the Biblical text) burgeoned upwards of 2,400 pages, please do not expect my next review to be of those Annotations. However, if you are left wondering why the Westminster Standards cited a certain passage to support a particular doctrine, perhaps, as a starting point, you should look to see if the Annotations (which express the common view of the time) interpret that passage in a way that clearly would support that doctrine. (You can read or download The English Annotations online here.)

After demonstrating that Calvin’s theology of worship fits with Westminster’s doctrines, Ward essentially encourages us to be interested in the Directory as “a much-neglected but extremely valuable part of the work of the Westminster divines” (p. 139). It is valuable, in part, because, given the context of rigid, word-for-word liturgies forced upon churches and ministers, the Westminster Directory for the Public Worship of God provides “an outline of how worship should be conducted” and “offers a middle way between a fixed liturgy and leaving a minister entirely to his own devices” with “studied ambiguities” to allow local circumstances to inform individual practice (p. 96).

In case these questions based on Ward’s answers have whetted your appetite to study the Westminster Directory for Public Worship, it is included as an appendix to this book.

Ryan Speck is Pastor of Redeemer Presbyterian Church in Columbia, MO, and Review Editor for Theology here at Books At a Glance.

SCRIPTURE AND WORSHIP: BIBLICAL INTERPRETATION AND THE DIRECTORY OF WORSHIP, by Richard A. Muller and Rowland S. Ward