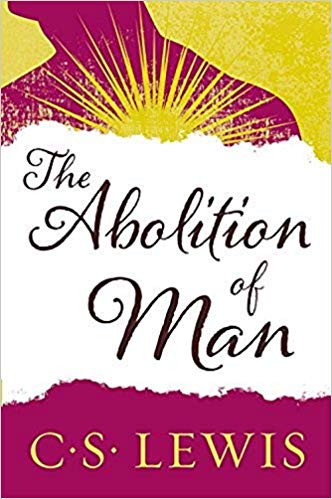 THE ABOLITION OF MAN, by C. S. Lewis

The Abolition of Man is based on three lectures that Lewis delivered at King’s College (University of Durham). He explores the relationship between values, science, power, and the fate of humanity. Lewis argues that there is an objective way of morality which has been recognized across cultures (which he terms the Tao). He insists that if people reject this moral order, there will be no rational grounds for doing what is right or for preferring one value over another. If people gain power and control over Nature without being guided by the Tao, the result will be that human nature itself will be destroyed.

Chapter 3 The Abolition of Man

Appendix: Illustrations of the Tao

The indoctrination of children is often accomplished in subtle ways. We too rarely pay attention to what is being taught to children. There is a book being used in schools (we’ll refer to it as The Green Book), which argues that when Coleridge said that a waterfall was sublime, this was a statement about his own feelings, and not about a quality of the waterfall itself. If taken seriously, children will learn that statements about value are really about a speaker’s feelings, and that they are unimportant. If we are only saying something about our feelings, that only in a child’s mind equates to unimportance. The Green Book also uses a terribly written advertisement about sailing to try to show that all emotional statements about experience are irrational and silly. In this book—which a textbook on English literature—there is no comparison between well-written pieces that treat the same ideas and themes. Nothing is learned about literature. What the students are getting is philosophical theory and ethics rather than being guided in literary criticism.

Our need is not to eliminate all emotions because they can be badly cultivated, but rather to learn how to cultivate right and good emotions. Classically it was believed that the universe was a particular way, and as a result, there were right and wrong emotional responses to its various features. Coleridge and others believed that the just response to the waterfall was to recognize that it was sublime. Their emotional response was merited by what they saw. It used to be held that we were made to value things in accordance with their intrinsic merit. Growth in virtue was growth in the proper ordering of our affections. Many philosophies and religions have recognized this principle. We will refer to the shared conception of the objective way of the moral universe as the Tao. Our approvals and disapprovals are to be trained to react accordingly to the Tao. The Green Book rejects the idea of the Tao and replaces it with human subjective emotions. For those who accept the Tao, children are to be trained to have the proper emotional responses to the nature of things. Our intellect cannot control our animal nature unless we have proper emotions. The ancients recognized that the head (i.e. reason) rules the belly (i.e. the appetites) through the chest (i.e. organized emotions and trained sentiments). The philosophy of The Green Book creates men without chests. Then, having removed what’s necessary for virtue, we demand people to be virtuous.

If the teaching of The Green Book is actually accepted, society will be destroyed. Even as the book denies traditional values, it must be substituting other values, or else it is written for no purpose. The purpose of their writing is so that young people will share their views and goals. Empirical observation of facts can never bridge the gap into morals (i.e. what is cannot lead us to conclude what we ought to do). We can be told that it is good to preserve society, but those who reject the Tao will never be able to rationally account for why an individual must sacrifice for the community.

THE ABOLITION OF MAN, by C. S. Lewis