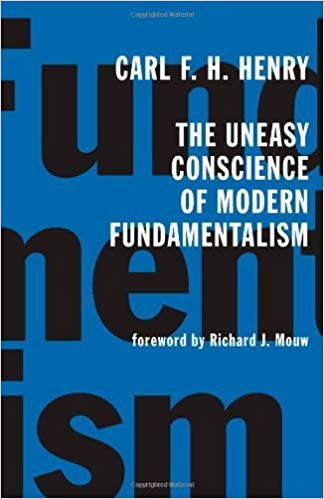 In The Uneasy Conscience of Modern Fundamentalism, Henry charges the evangelical fundamentalists in his time with ignoring social reforms because of their differences with the non-evangelical community, which is bringing about reform. He calls the evangelical fundamentalists in his time to work for social justice together, arguing that their doctrinal convictions necessitate opposition to social evils and must be proclaimed as the only ultimate solution to a hurting world.

Henry argues that to avoid slipping into the status of a sect, Christian fundamentalists must “rediscover…the revelational classics and the redemptive power of God” (9) like Christians did in the Reformation when they went back to the Bible. What concerns Henry is not that some are teaching that substitutionary atonement is immoral (this is incorrect but there will always be opposition to evangelical doctrines), but that some Christians have taken secondary doctrines or even theological issues that are obscure and made them central doctrines, which has made evangelicalism vulnerable to unnecessary criticism. Furthermore, Christians must deal with contemporary social issues. Henry is not responding to the uneasy conscience against the fundamentals, but rather to the conscience that is uneasy about the fact that fundamentalists have not applied the fundamentals to prominent problems in their day.

Ockenga calls for a “progressive Fundamentalism” (13) that takes the right side on important social issues. The Bible teaches that Jesus cared for human beings, and therefore Christians must have a right morality. For example, Matthew 28 not only calls for evangelism but also helping the world. Fundamentalists have sinfully neglected the latter, which is seen in actions like leaving secular fields of work. Henry gives a healthy solution to this problem.

Chapter 1: The Evaporation of Fundamentalist Humanitarianism

Henry claims that Christians in his context often discount the modern tendency to shy away from the supernatural. This is legitimate because World War I and II have shown that the propositions this tendency is based on—human beings are fundamentally good and society is on an upward trajectory—are false.

However, Christian fundamentalism has its own uneasy conscience as well. Non-evangelicals have charged the fundamentalists with not caring about society as Christians should, but they have received no help from entire evangelical groups with their initiatives in social reforms. This might be legitimate if the evangelicals set up their own efforts to deal with such issues, but they have not. Worse yet, some evangelical pastors have neglected to even preach about such things. Fundamentalists have come to be known as separatists who break off from one another based on issues that are not important. However, they should be known for the “historic evangelical doctrinal fundamentals” and they should, like Machen, insist that “Christianity has a message relevant to the world crisis” (19). It is ridiculous that the supernaturalism of the evangelicals is wed to a disinterest in the well-being of people. Fundamentalists have provided a response to individual sin, but not social sin, which implies that they may not have sufficiently dealt with the former either. Some non-evangelicals have sought to convince evangelicals to get involved by appealing to arguments concerning the redemption of individuals, but fundamentalists have still not responded.

Chapter 2: The Protest Against Foredoomed Failure

According to Henry, the fundamentalist believes that only a biblical understanding of humanity as inherently sinful can provide the foundation for social change that works. Furthermore, since most fundamentalists are premillenialists or amillenialists, they do not believe along with the postmillenialists that the church is to bring about the kingdom of God on earth, which will usher in the return of Christ. Fundamentalists oppose non-evangelical anthropology as well as their social programs and intended ends, such as peace and democracy, because they closely link the method and theology of non-evangelical efforts.